This is a day I have dreamed of for years. In 2013 our friend Chris was talking to us about his book The Dead Men Stood Together which is a prose retelling of The Rime of  the Ancient Mariner told from the point of view of the cabin boy. It's a great book by the way - you should totally read it.

Anyway, he casually said, "Have you ever been to Watchet? It's where Coleridge wrote the Ancient Mariner.  There is a statue of the Mariner with the albatross around his neck by the harbour. Oh and you can stand in the forest and hear the sea." This offhand comment lodged in my heart and I have thought of it often. Today we got to make that dream come true.

We took a very long taxi ride with our delightful taxi man to the town of Watchet (which is just fun to say as it sounds like "Watch it!" ) and the first thing we saw in the harbour was this beautiful statue: 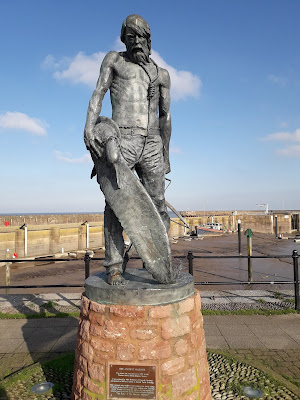 Here are some close ups of the statue.  Look at the rope around his neck like a noose. Look at how big the albatross is. Much bigger than I always pictured them. Look at his finger on the trigger of the crossbow. I could not decide if it was with revulsion that he held it with merely one finger like he could not bear to touch it or was it his itchy trigger finger? Look at me with the Mariner holding our signed copy of The Dead Men Stood Together. 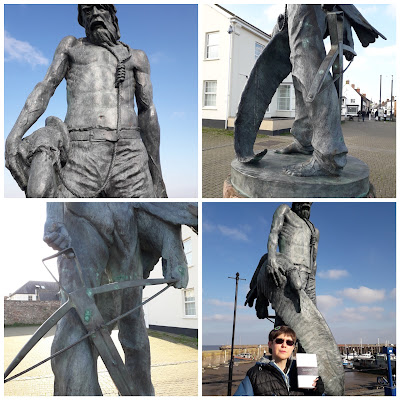 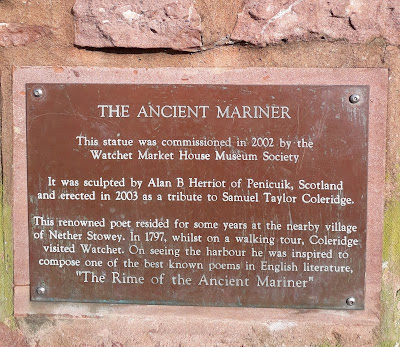 We then walked around the harbour and looked out across the rocks at the sea. 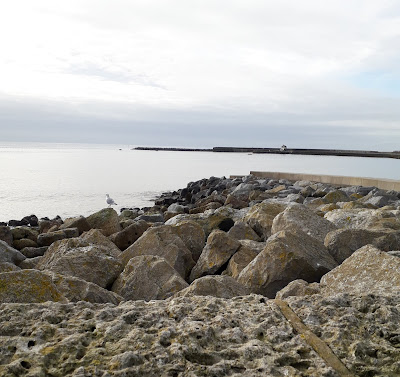 Next we walked walked up the incredibly steep coastal path and Chris was right. You were surrounded by trees and could hear the sea. It was glorious. We got to the top and could see for miles over the sea. We sat down and had a picnic of peanut butter on oat cakes with packets of strawberry jam we snicked from breakfast along with bananas we also liberated from the restaurant.

We sat on the green  grass in the bright glare of the sunshine and talked about Coleridge.  We go way back, us and Mr C. On the night we first met we talked about the Romantic Poets.  I liked Wordsworth (who will forever be known as Turdsworth to us), he liked Keats and Shelley but we both loved Coleridge.  We spent about an hour discussing The Rime of the Ancient Mariner and quoting our favourite lines to each other. Because we were geeks even then.

Have you ever looked at Coleridge? Bless his heart, his most famous portrait makes him look a bit toady. 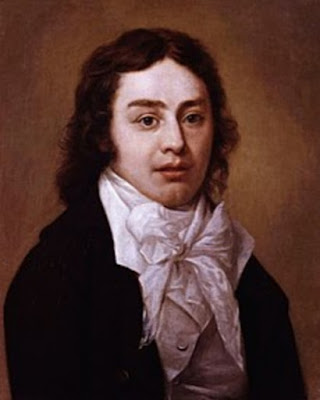 See what I mean? So Spiderman said "And now The Wind in the Willows starring the Romantic Poets!"which made me laugh so hard I snorted. Then we spent a good half hour deciding who was who. This was the result:

Mr Badger-- Wordsworth
Mole-- Keats
Ratty -- Shelley
Mr Toad--Coleridge
And Byron probably thinks he is Pan but he is more like The Wayfarer the vagabond sea faring rat.

Then we headed back down the steep hill (much easier on the  way down) and had chips in a cute little cafe before our friendly taxi man arrived to drive us home.

Posted by Heather Tisdale at 05:53