Hello lovelies! We're back! Did you miss us? How could you because I didn't tell you we were going!

We have been planning this epic holiday for some time to celebrate some milestones in our lives. Can you believe this month is 31 years since our first date? It also marks 30 years  since the Amazing Spiderman and I were exchange students with the LC/MC Overseas Programme. We got engaged on that trip and decided not only to get married but to somehow emigrate to the UK. On this trip we decided our future and here we are.

So as our LC/MC experience featured both English lit and science we wanted to take a holiday that covered both of of those subjects.  But more on that later.

First, how did we get there? Well,  this is where the bad beginning happened. Travel can be expensive so we were going to "around the world in 80 days" it and take a variety of  public transportations. We were supposed to catch the Megabus at 2am to take us to Bristol.  Then from Bristol we would catch a train to Salisbury then change trains and go to Crewkerne where we would get a taxi to Cricket St Thomas.  That was the plan.

What actually happened was the Megabus never showed up. That had never happened before. They are supposed to update on Twitter if a coach breaks down or is running late but there was nothing. Nada. Zip. Zilch. Dim. This was Mega Annoying as it was bloody freezing and we waited 3 hours in the middle of the night shivering at a bus stop. So at 5am we ran to the train station and shelled out £70 for emergency train tickets to Bristol. Now we were pissed and broke. So 3 hours to Bristol, 2 hours wait in the train station then and an hour to Salisbury and another hour to Crewkerne.  By this point we (read this as me) were tired, cold, hungry and generally grouchy. I wanted nothing more than to taxi the 6 miles to Cricket St Thomas and have a nap but there were no taxis. None. We called around and all the taxi companies were busy and it was an hour before one could pick us up. So by then I was REALLY tired, cold and hungry and my back was killing me.

But then  we arrived and it was all forgotten.  Like the agony of childbirth once you see your lovely child. 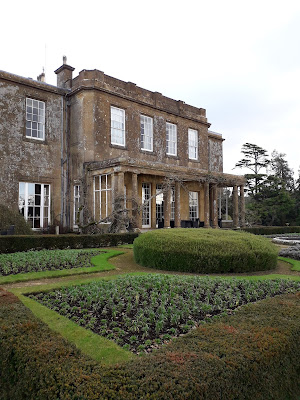 We were staying at the very posh manor house that was used as the location for Grantleigh Manor in the Britcom To the Manor Born.  We were given a complimentary glass of perry cider and shown to our beautiful room in the historic manor house. 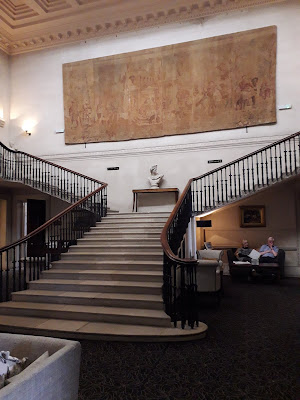 Our room was stunning. 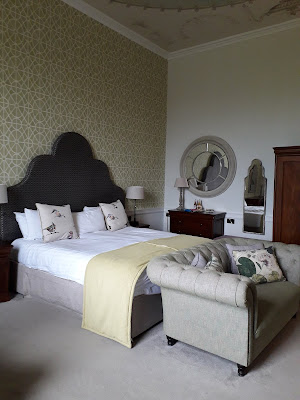 View from our window. 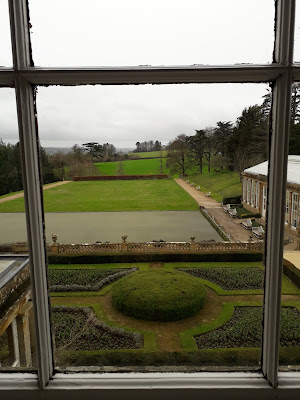 We ate the complimentary snacks and crawled into the cloud like bed and slept until dinner time then  toddled along to the posh restaurant for our three course meal. My only complaint about the food would be there were vegan options and there were gluten free options but not much overlap. But we still found plenty to eat and the highlight was a v/gf warm brownie with a scoop of coconut based salted caramel ice cream for dessert.

And did I mention it was like Geriatric Junction? We are the youngest people here by far.

Despite a rocky start it ended up  a very happy ending . It also proves I need food and sleep to be a decent human being. Stay tuned for part 2!
Posted by Heather Tisdale at 05:36